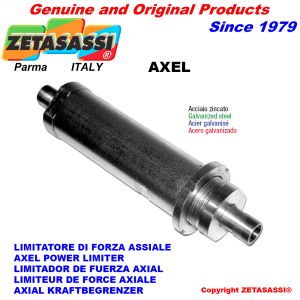 Axial power limiters type Axel are used to determine with precision the pulling or pushing limits beyond which the system automatically enters idle gear and stops transmitting motion. The AXEL power limiter can be equipped with a sensor that immediately signals the triggering of the safety device.

The axial power limiter normally takes the form of a stiff rod that transmits a pulling or pushing motion without any back-lash. When, due to operational irregularities, the force previously set on the machine is exceeded, the power  limiter releases its rod from the self-locking grippers, thereby enabling it to slide axially without transmitting any more force. Once the problem has been solved, the power limiter re-locks itself in its initial synchronous position. The transmittable force can be set, within a given range, simply acting on the setting threaded ring nut.

Power limiters are hermetically sealed, lifetime lubricated  and can operate in a difficult situation without any maintenance

AXEL axial force limiters are used to accurately determine the draft or thrust limits beyond which the system slips into idle and no longer transmits motion.The AXEL force limiter can be equipped with a sensor to signal immediately when the safety device goes into action.

The axial force limiter behaves normally like a stiff rod which transmits the draft or thrust motion.When, because of irregular operation, the force calibrated previously is exceeded, the force limiter allows the rod to glide axially, by releasing the self-locking chucks, without transmitting any force.After removing the cause of jamming and after pushing or pulling the limiter in the direction opposite to the jam, the force limiter returns to lock itself in the initial position.The transmissible force can be calibrated, on its scale, simply using the adjustment ring.

It is possible to order products already pre-calibrated, and we can also create different loads from those indicated in the catalogue.

The AXEL force limiters are watertight, with lifetime lubrication, and can work in difficult environments without needing maintenance.